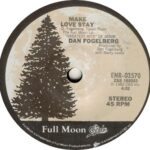 “Make Love Stay” is the title of a popular song from 1983 written and recorded by the American singer-songwriter Dan Fogelberg. It was one of two new songs included on his 1982 greatest hits album, along with the song “Missing You”.

Fogelberg later described “Make Love Stay” in the liner notes to a retrospective album as a “sinuous piece written around a chapter of Tom Robbins’ Still Life with Woodpecker” and as “a musical question that, unfortunately, eludes me still.”

“Make Love Stay” peaked at No. 29 on the US Billboard Hot 100 chart in March 1983. It was Fogelberg’s third song to top the Billboard adult contemporary chart, following his earlier hits “Longer” and “Leader of the Band”

Greatest Hits is a compilation album by American recording artist Dan Fogelberg. It included two previously unreleased tracks, “Missing You” and “Make Love Stay”, both of which were released as singles and peaked at chart positions #23 and #29 on the Billboard Hot 100 chart, respectively. Both of the new songs made the Top 10 […]