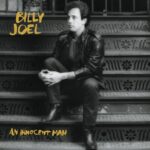 An Innocent Man is the ninth studio album by American singer-songwriter Billy Joel, released on August 8, 1983. The concept album is a tribute to the American popular music of Joel’s adolescent years with Joel paying homage to a number of different and popular American musical styles from the late 1950s and early 1960s, most notably doo-wop and soul music. The album cover artwork was taken on the front steps of 142 Mercer Street, just north of the intersection of Mercer and Prince Street in the SoHo neighborhood of Manhattan, New York City.

In an interview about the making of the album, Joel talks about the fact that at the time that he was recording An Innocent Man, he was newly divorced from his first wife, Elizabeth Weber, and was single for the first time since achieving rock star status. He had the opportunity to date supermodels such as Elle Macpherson and Christie Brinkley, and because of these experiences, he said, “I kind of felt like a teenager all over again.” Joel started writing songs in the same styles as pop songs that he remembered from his teenage years, citing pop music from the late 1950s and early 1960s, including “early R&B songs and The Four Seasons, and the Motown music, soul music.” According to Joel, the various songs were not meant to be autobiographical, and instead center around various made-up characters.

Joel explained, “When you’re gonna write songs for a new album, you write what you’re feeling. And I didn’t fight it. The material was coming so easily and so quickly, and I was having so much fun doing it. I was kind of reliving my youth. … I think within 6 weeks I had written most of the material on the album.” Joel also said that he was pleasantly surprised to have hit records in the 1980s with retro songs like the mostly a cappella doo wop song “The Longest Time.” The song “Easy Money”, which was made as a tribute to early R&B, was initially written for the 1983 film of the same name starring Rodney Dangerfield, and was the song that “kicked off” the creation of An Innocent Man, according to Joel. Dangerfield later made a cameo appearance at the end of the music video for the song “Tell Her About It”, as an exchange for Joel’s song in support of Dangerfield’s movie. The song “Christie Lee” describes a narrative about a saxophone player who has his heart broken by a woman he falls in love with, whom he later realizes is only interested in him for his saxophone skills

5 Tell Her About It