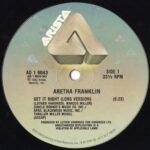 “Get It Right” is a soulful boogie song written by Luther Vandross and Marcus Miller which was an R&B hit for Aretha Franklin in 1983. Released from the album of the same title, it reached number one on the Hot Soul Singles chart in August 1983 and peaked at number 61 on the Billboard Hot 100. The single reached number nine on the Hot Dance Club Play chart and number 74 on the UK Singles Chart.

Get It Right is the twenty-ninth studio album by American singer Aretha Franklin, released on July 14, 1983 by Arista Records. It was produced by Luther Vandross, following his successful teaming with the singer for the Gold-certified album, Jump to It, in 1982. Get It Right was not as commercially successful, and Franklin did not […]