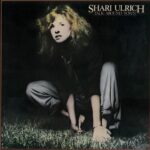 Talk Around Town (1982, MCA) is the third album by Shari Ulrich.

Sharon “Shari” Ulrich (born 17 October 1951) is a Canadian/American musician and songwriter. She has also worked as a television host, actress, film composer, and educator. A multi-instrumentalist, she plays Violin, Mandolin, guitar, piano, and Dulcimer. She has been nominated for a Juno Award four times, winning “Most Promising Female Vocalist of the Year” in 1982. At the 15th Genie Awards in 1994, Ulrich, Graeme Coleman and David Graff received a Genie Award nomination for Best Original Song, for the song “Every Road”, which appeared in the film Max.

2 The One And Only

6 I Don’t Wanna Talk About It

7 With Or Without You

8 You’re Not So Innocent