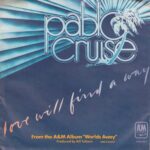 “Love Will Find A Way” is a single released by American rock group Pablo Cruise from the album Worlds Away in May 1978. On the Billboard Hot 100, “Love Will Find a Way” peaked at number 6. The song received a considerable amount of airplay during the summer of 1978, prompting critic Robert Christgau to say, “Hear David Jenkins sing ‘once you get past the pain’ fifty times in a day and the pain will be permanent”, referring to the lyrics of the chorus.

Worlds Away is the fourth, and most successful album, by the California soft rock group Pablo Cruise. The album charted higher than any other of the band’s albums, reaching #6 in the United States. Three singles were released from the album: Love Will Find a Way, Don’t Want to Live Without It, and I Go […]