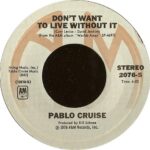 “Don’t Want To Live Without It” is the second single from Pablo Cruise‘s album Worlds Away. It was released in 1978 and peaked at #21 in the US Billboard Charts.

Worlds Away is the fourth, and most successful album, by the California soft rock group Pablo Cruise. The album charted higher than any other of the band’s albums, reaching #6 in the United States. Three singles were released from the album: Love Will Find a Way, Don’t Want to Live Without It, and I Go […]