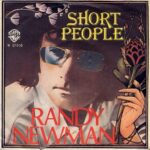 “Short People” is a song by Randy Newman from his 1977 album, Little Criminals. The verses and chorus are lyrically constructed as a prejudiced attack on short people. In contrast, the bridge states that “short people are just the same as you and I.” Many listeners thought that the song reflected Newman’s sincere beliefs. However, Newman intended the song to be a satire about prejudice more broadly: “The guy in that song is crazy. He was not to be believed.” As with many of his songs such as “Rednecks”, Newman wrote the song from the point of view of a biased narrator

Little Criminals is a 1977 album by Randy Newman. Like most of Newman’s work, the album eschews traditional pop-music themes (“I’ll Be Home” is the only love song on the album) in favor of musical story-telling, often featuring quirky characters and cynical views. The first song on the album – “Short People” – became a hit single […]