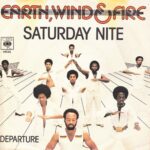 “Saturday Nite” is a song by R&B band Earth, Wind & Fire which was issued as a single in 1976 by Columbia Records. The song reached numbers 4 and 21 on Billboard Hot Soul Songs and Hot 100 charts, respectively. “Saturday Nite” also rose to No. 17 on the UK Singles chart – their first hit in the United Kingdom

“Saturday Nite” was written by Maurice White with Philip Bailey and Al McKay. The single’s b-side is a tune called Departure. Both songs came from EWF’s 1976 studio album Spirit.

Spirit is the seventh studio album by American band Earth, Wind & Fire, released on September 28, 1976 by Columbia Records. The album rose to No. 2 on both the Billboard 200 and Top Soul Albums charts. Spirit has also been certified Double Platinum in the US by the RIAA.