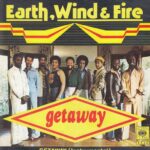 Getaway was produced by Maurice White and Charles Stepney and composed by Beloyd Taylor and Peter Cor Belenky. An instrumental version of Getaway was the single’s b-side. Getaway also came upon EWF’s 1976 studio album Spirit.

Spirit is the seventh studio album by American band Earth, Wind & Fire, released on September 28, 1976 by Columbia Records. The album rose to No. 2 on both the Billboard 200 and Top Soul Albums charts. Spirit has also been certified Double Platinum in the US by the RIAA.