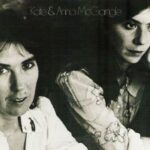 “Swimming Song” was written and originally performed by Kate’s husband at the time, singer-songwriter Loudon Wainwright III, who is also referenced (without being explicitly named) in the song “Go Leave”. On 25 December 1976, the album was voted Rock Album of the Year by London’s Melody Maker. It was also listed at #5 on the 1976 Pazz & Jop poll. In 2016, the album was named as the jury winner of the Polaris Heritage Prize in the 1976-1985 division.

6 (Talk To Me Of) Mendocino

12 Travelling On For Jesus