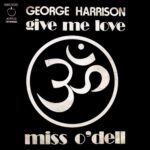 “Give Me Love (Give Me Peace On Earth)” is a song by English musician George Harrison, released as the opening track of his 1973 album Living in the Material World. It was also issued as the album’s lead single, in May that year, and became Harrison’s second US number 1, after “My Sweet Lord”. In doing so, the song pushed Paul McCartney and Wings’ “My Love” from the top of the Billboard Hot 100, marking the only occasion that two former Beatles have held the top two chart positions in America. The single also reached the top ten in Britain, Canada, Australia and other countries around the world.

“Give Me Love (Give Me Peace on Earth)” is one of its author’s most popular songs, among fans and music critics, and features a series of much-praised slide-guitar solos from Harrison. The recording signalled a deliberate departure from his earlier post-Beatles work, in the scaling down of the big sound synonymous with All Things Must Pass and his other co-productions with Phil Spector over 1970–71. Aside from Harrison, the musicians on the track are Nicky Hopkins, Jim Keltner, Klaus Voormann and Gary Wright. In his lyrics, Harrison sings of his desire to be free of karma and the constant cycle of rebirth; he later described the song as “a prayer and personal statement between me, the Lord, and whoever likes it”.

Living In The Material World is the fourth studio album by English musician George Harrison, released in 1973 on Apple Records. As the follow-up to 1970’s critically acclaimed All Things Must Pass and his pioneering charity project, the Concert for Bangladesh, it was among the most highly anticipated releases of that year. The album was […]