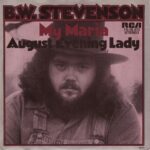 “My Maria” is a song co-written by BW Stevenson and Daniel Moore. Stevenson released “My Maria” as a single in August 1973, and the song became a Top 10 hit, peaking at number 9 on the US pop chart. It remained in the Top 40 for twelve weeks. In addition, “My Maria” spent one week at number 1 on the US adult contemporary chart. The guitar portion of the track was played by Larry Carlton. A cover version by Brooks & Dunn reached number 1 on the US country music chart and won the 1997 Grammy for Country Performance by a Duo or Group with Vocal.