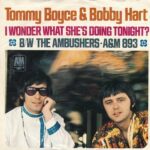 “I Wonder What She’s Doing Tonight” is a song written and originally recorded by Tommy Boyce and Bobby Hart (not to be confused with the Barry & the Tamerlanes song of the same title released in 1963). The Boyce and Hart composition was arranged by Artie Butler. Entering the Billboard Hot 100 at #87 just before Christmas 1967, it became a true hit in 1968, reaching #7 on the Cash Box chart and #8 on the Billboard Hot 100 chart. Marvin Stamm performs the trumpet solo and the recording notably features the voice of Tommy Boyce saying “Aww, come on now” in the second verse and “Alright, Bobby, let’s give it to them” to Bobby Hart just before the third verse.

Boyce and Hart also recorded a version in French featuring the same instrumentation and verbal cues by Tommy Boyce.