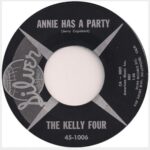 Annie Has A Party is a single by The Kelly Four, released in 1960, on the B-side is a song called So Fine, Be Mine. The Kelly Four was the backup band from Eddie Cochran. They only released a few singles.

1 Annie Has A Party (Jerry Capeheart)
2 So Fine, Be Mine (Larry Knechtel; Mike Deasy)