The Sons Of Champlin

The Sons Of Champlin 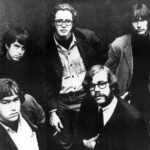 The Sons of Champlin are an American rock band, from Marin County, California in the San Francisco Bay Area, formed in 1965. They are fronted by vocalist-keyboardist-guitarist Bill Champlin, who later joined rock band Chicago, from 1981 to 2009, placing Sons of Champlin on hiatus from 1981 to 1996. They brought to the late ‘60s music scene in the Bay Area a soulful sound built around a horn section, sophisticated arrangements, philosophical themes, Bill Champlin’s songwriting and blue-eyed soul singing, and Terry Haggerty’s jazz-based guitar. They are one of the enduring 1960s San Francisco bands, along with Jefferson Airplane, the Grateful Dead and Moby Grape. (more)

1968 The Sons Of Champlin – Loosen Up Naturally

1970 The Sons Of Champlin – Minus Seeds And Stems