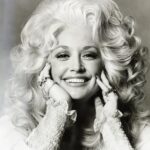 Dolly Rebecca Parton (born January 19, 1946) is an American singer-songwriter, actress, philanthropist, and businesswoman, known primarily for her work in country music. After achieving success as a songwriter for others, Parton made her album debut in 1967 with Hello, I’m Dolly, which led to success during the remainder of the 1960s (both as a solo artist and with a series of duet albums with Porter Wagoner), before her sales and chart peak came during the 1970s and continued into the 1980s. Parton’s albums in the 1990s did not sell as well, but she achieved commercial success again in the new millennium and has released albums on various independent labels since 2000, including her own label, Dolly Records. She has sold more than 100 million records worldwide.

Parton’s music includes Recording Industry Association of America (RIAA)-certified gold, platinum and multi-platinum awards. She has had 25 songs reach no. 1 on the Billboard country music charts, a record for a female artist (tied with Reba McEntire). She has 44 career Top 10 country albums, a record for any artist, and she has 110 career-charted singles over the past 40 years. She has composed over 3,000 songs, including “I Will Always Love You” (a two-time U.S. country chart-topper, as well as an international pop hit for Whitney Houston), “Jolene”, “Coat of Many Colors”, and “9 to 5”. As an actress, she has starred in films such as 9 to 5 (1980) and The Best Little Whorehouse in Texas (1982), for which she earned Golden Globe nominations for Best Actress, as well as Rhinestone (1984), Steel Magnolias (1989), Straight Talk (1992) and Joyful Noise (2012).

1984 Kenny Rogers & Dolly Parton – Once Upon A Christmas