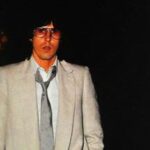 Dick St Nicklaus is American singer/songwriter born in Yakima, WA. Before he started a solo carreer he worked with The Kingsmen and Lamont Dozier.

Dick St. Nicklaus’s 1st album “Magic” was big in Osaka. Osaka has a different atmosphere and their own culture and in those days they were keen to find out some unfamiliar artists by themselves. One was Dick St. Nicklaus. Sony Music Osaka branch A&R decided to release “Magic” limited in Kansai (western part of Japan surrounding Osaka) and this trial was a success.

The album sold well and thus “Magic” was released all over Japan. Dick St. Nicklaus got a deal for his 2nd album “Sweet And Dandy” with Sony Music Japan. This album is opened by the catchy tune “Bye Bye Baby” clearly inspired by the keyboard rhythm pattern used by Doobie Brothers on their smash hit “What A Fool Believes”. The beautiful ballads tune “Love, Love, Love” was covered by Bill Medley on his 1981 album “Liberty” later. (source)