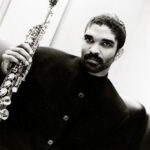 Art Porter Jr. was born in Little Rock, Arkansas in 1961. Porter joined his father’s band (The Art Porter Trio) as a drummer at the age of 9 and played with them into his teen years. Porter was then drawn to the saxophone, after noticing its melodic abilities, and began to play it during shows with his father’s group. Porter is a 1979 graduate of Parkview Arts and Science Magnet High School in Little Rock, where he played in the marching and jazz bands. When Porter turned 16, he began to be barred from clubs because he was under 21. It was during this time that he was arrested and charged with working under-age in a nightclub serving alcoholic beverages. Then Arkansas Attorney General, and future President of the United States Bill Clinton, who was also a saxophonist, intervened to get the charges dropped and pushed for the law to be changed to allow under-age musicians to appear in adult facilities as long as their legal guardians accompanied them. This law became known as “The Art Porter Bill”. Porter attended Berklee College of Music and Northeastern Illinois University where he studied music, earning a bachelor’s degree in Arts in the latter. He later attended Roosevelt University, where he would earn his master’s degree. Porter studied piano under Ellis Marsalis, a former saxophonist himself.

In the mid-1980s, Porter moved to Chicago, Illinois, and studied tenor saxophone with Von Freeman and performed with Pharoah Sanders and Jack McDuff. During the 1990s, he developed an interest in R&B and hip hop and merged elements of these into his performances. Soon after this, Porter signed with Verve Forecast Records and PolyGram and produced several albums, beginning in the summer of 1992 with Pocket City, followed by Straight to the Point, Undercover, and finally Lay Your Hands on Me. Porter and his father performed for President Clinton during his 1993 inauguration, playing Amazing Grace at a prayer breakfast.