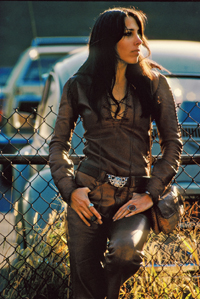 Annette Peacock is an American composer, musician, songwriter, producer, and arranger. She is a pioneer in electronic music who combined her voice with one of the first Moog synthesizers in the late 1960s.

Annette Peacock was writing music by the time she was four years old. She is self-taught except for her time as a student at The Juilliard School in the early 1970s. She grew up in California.

She moved to New York to marry jazz bassist Gary Peacock in 1960. During the early 1960s, she was an associate and guest of Timothy Leary. and Ram Das at Millbrook, and was among the first to study Zen Macrobiotics with Michio Kushi, a discipline she continues to uphold. Peacock toured Europe with avant-garde jazz saxophonist Albert Ayler while she was married to Gary Peacock, then pianist Paul Bley. Her compositions appeared on his album Ballads and influenced the style of ECM Records. She was a pioneer in synthesizing electronic vocals after having been given an early model of the Moog synthesizer by its inventor, Robert Moog.

She performed with the Bley-Peacock Synthesizer Show at New York’s Town Hall in November 1969 and the next month at Philharmonic Hall which she promoted with late-night TV ads and an appearance on The Johnny Carson Show. Her official debut solo album, I’m the One (RCA Victor), was released in 1972.

During the 1970s and ’80s, she worked with Karlheinz Stockhausen, Allan Holdsworth, Evan Parker, Brian Eno, Bill Bruford, Mike Garson, Mick Ronson before moving back to the U.S. The album An Acrobat’s Heart (ECM, 2000) took two years to compose and arrange, and broke her twelve-year hiatus from recording