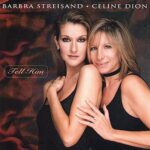 “Tell Him” is a song written by Linda Thompson and producers Walter Afanasieff and David Foster. It was recorded as a duet between American singer Barbra Streisand and Canadian singer Celine Dion for their 1997 albums, Higher Ground and Let’s Talk About Love, and released as the lead single from these albums on November 3, 1997.

The song was a top-10 commercial success across Europe and Australia. It was nominated for the Grammy Award for Best Pop Collaboration with Vocals at the 40th Annual Grammy Awards. Later, “Tell Him” was included on both singers’ greatest hits albums: Streisand’s The Essential (2002), Duets (2002) and The Ultimate Collection (2010), and Dion’s The Collector’s Series, Volume One (2000), My Love: Essential Collection (2008) and The Best of Celine Dion & David Foster (2012).

Let’s Talk About Love is the fifth English-language studio album by Canadian singer Celine Dion, released on 14 November 1997, by Columbia/Epic Records. The follow-up to her commercially successful album Falling into You (1996), Let’s Talk About Love showed a further progression of Dion’s music. Throughout the project, she collaborated with Barbra Streisand, the Bee […]