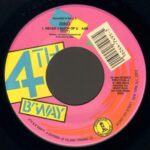 “Never 2 Much of U” is the final single by Dino Esposito from his album 24/7 and reached #61 in the US Billboard Charts.