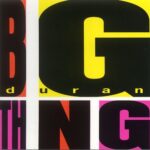 Big Thing is the fifth studio album by English new wave band Duran Duran. It was released on 18 October 1988 by EMI. The album reached number 15 on the UK Albums Chart and number 24 on the US Billboard 200.

In 1988, the musical climate was changing, veering to a more dance-based groove. Duran Duran were known primarily as an early 1980s new wave synth-pop act, and the band was sitting at a career crossroads; Big Thing was their stab at maintaining mainstream popularity.

Turning to more synth- and bass-heavy grooves than their previous efforts, Big Thing was seen by many as the band’s “house music” album. Tracks like the first single “I Don’t Want Your Love”, the title track, and the album’s second single “All She Wants Is” cemented the band’s more aggressive dance angle.

To get the new music played without preconceived ‘teeny bopper band’ notions of Duran Duran, the band sent an edited three-minute version of album tracks “The Edge of America” and “Lake Shore Driving” to radio stations, known as “Official Bootleg: The LSD Edit”. The promo was credited to “The Krush Brothers”, which the band also used in a few surprise live dates.

Dance music and stylistic respellings aside, Big Thing was an album of contrasts. While the general feel was a response to the burgeoning house music and rave scene, a number of tracks on the album harkened back to the band’s more lush arrangements. Tracks like “Land”, “Palomino” and the single “Do You Believe in Shame?” had more in common with “Save a Prayer” or “The Seventh Stranger” than with Chicago house.

The album also contains two short pieces entitled “Interlude One” and “Flute Interlude” which were more experimental in nature than anything the band had done before. The band would repeat the use of these “interludes” on future albums with “Shotgun” appearing on Duran Duran (1993), “Fragment” and “Kiss Goodbye” on Pop Trash (2000), and “Return to Now” and “A Diamond in the Mind” on All You Need Is Now (2011).

While the album and the first two singles did quite well in the charts, the relative failure of the third single “Do You Believe in Shame?” (it reached No. 30 in the UK) killed off any chance for a fourth single from the album. A house version of “Drug” which had been recorded with producer Marshall Jefferson in April 1989 was tentatively slated as that single.

A brief legal challenge surrounded the close resemblance of the melody of “Shame” to that of the Dale Hawkins classic “Suzie Q” (more famously covered by Creedence Clearwater Revival). It was judged that there was no intentional plagiarism in this case.

The album was eventually reissued with the original Daniel Abraham mix of “Drug” added as a bonus track, previously released as a b-side to the “Do You Believe in Shame?” single.

2 I Don’t Want Your Love

3 All She Wants Is

6 Do You Believe In Shame?

11 The Edge Of America