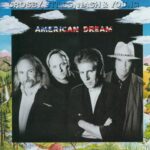 American Dream is an album by the band Crosby, Stills, Nash & Young. Released in 1988 on Atlantic Records, it peaked at No. 16 on the Billboard 200 and has been certified platinum by the Recording Industry Association of America. To date, it is their final album of original material to receive either a gold or platinum citation by the RIAA. It is the highest-selling album by Neil Young in the 1980s. The album is dedicated to Jan Crosby, Anne Stills, Susan Nash and Pegi Young.

Neil Young promised David Crosby in 1983 that he would reunite with Crosby, Stills & Nash if Crosby could solve his problems with drugs and clean up. Five months in prison for Crosby at the Texas Department of Corrections in Huntsville during 1986 accomplished exactly that, and good to Young’s word the quartet assembled to record the second CSNY studio album at Young’s ranch in Woodside, California.

The title song, written by Neil Young, was a satire of sensational political scandals involving Oliver North, former presidential candidate Gary Hart and televangelist Jimmy Swaggart. Released as a single, it missed the Billboard Hot 100 completely, as did three of the other four singles released from the album. The only single to chart, “Got It Made”, peaked at No. 69 on the Hot 100, though it charted much higher on two format-specific Billboard charts— #11 on Adult Contemporary and #1 on Album Rock Tracks (now Mainstream Rock).

6 Nighttime For The Generals