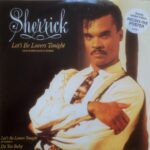 “Let’s Be Lovers Tonight” is the second single by Sherrick, taken from his self titled album, released in 1987. It peaked at #63 in the UK Charts.

Sherrick is the debut and only studio album from American soul singer and musician Sherrick (Lamotte Smith), released by Warner Bros. in 1987. It was largely produced by Michael Stokes and Sherrick, except two tracks, one which was produced solely by Sherrick and another by Bobby Sandstrom and Steve Barri. Tracks 1  Tell Me What […]