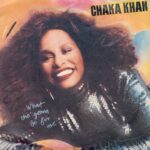 “What Cha’ Gonna Do For Me” is the title track of Chaka Khan‘s third solo album from 1981. The song was written by Ned Doheny and Hamish Stuart of the Average White Band. They had recorded the song a year earlier and released it on their LP Shine.

The song was the second of four number-one singles on the R&B chart for Khan and was at the top spot for two weeks. The single was also her second entry on the Billboard Hot 100, reaching number 53. On the Cash Box Top 100, “What Cha’ Gonna Do For Me” reached number 49. In New Zealand, the song peaked at #21

What Cha’ Gonna Do For Me is the Gold certified third solo album by American R&B/funk singer Chaka Khan, released on the Warner Bros. Records label in 1981. Three singles were released from What Cha’ Gonna Do: the Beatles cover “We Can Work It Out” (US R&B #34), the McCrarys cover “Any Old Sunday” (#68) […]