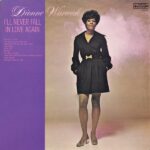 “I’ll Never Love This Way Again” is a song by American singer Dionne Warwick. It was composed by Richard Kerr and Will Jennings and produced by her labelmate Barry Manilow for Warwick’s Arista Records debut, Dionne (1979). Initially recorded by Kerr himself for his 1978 album Welcome to the Club as “I Know I’ll Never Love This Way Again”, it was also recorded by singers Cherrill Rae Yates and Cheryl Ladd before Warwick recorded and released her version of the song.

The song was released as the album’s lead single on July 15, 1979 by Arista. Her first single on the record label after an unsuccessful tenure at Warner Bros. Records, the song brought Warwick renewed popularity when it reached number 5 on the US Billboard Hot 100 and number 6 in Canada, also peaking at number 18 on the Hot R&B/Hip-Hop Songs chart. “I’ll Never Love This Way Again” was eventually certified as gold by the RIAA for sales of over one million copies and won Warwick the 1980 Grammy Award for Best Female Pop Vocal Performance. For a time[when?], Warwick’s version of the song preceded reports about people with HIV/AIDS on Rush Limbaugh’s radio show.