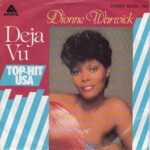 Isaac Hayes had written the tune for “Déjà Vu” in 1977 while touring with Warwick on the A Man and a Woman Tour: Warwick would recall then hearing Hayes play the tune – which he had entitled “Déjà Vu” without writing lyrics – and as she and Barry Manilow began preparing for the January 1979 recording sessions for the Dionne album, Warwick solicited a tape of “Déjà Vu” from Hayes to play for Manilow, who recruited his own regular lyricist Adrienne Anderson to write the words