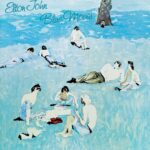 Blue Moves is the eleventh studio album by English musician Elton John. It was released in October 1976. It was John’s second double album (after Goodbye Yellow Brick Road) and the first to be released by his own label, Rocket Records Ltd. The album reached number 3 in the US charts, ending a long streak of chart-topping albums for John that began with Honky Château in 1972.

Having completed what he described as a “gruelling American tour”, John only gave a handful of performances at the time of release, and later announced (during a charity concert at Wembley Arena the following year), “I haven’t been touring for a long time. It’s been a painful decision, whether to come back on the road or not… I’ve made a decision tonight – this is going to be the last show… There’s a lot more to me than playing on the road.” He accordingly left the touring/live performing scene for a brief period. Kenny Passarelli, Caleb Quaye, James Newton-Howard and Roger Pope played their last shows together as part of the Elton John Band during John’s seven-night engagement at Madison Square Garden at the conclusion of the Louder Than Concorde Tour, and formally were let go from the band after the album’s release. The shows were the last time Pope, Passarelli, Quaye and John played together. Howard would briefly rejoin John’s touring band in 1980, and work with him on the 1986 Tour De Force Tour shows in Australia and New Zealand. Only Davey Johnstone and Ray Cooper returned for roles on John’s next album, A Single Man and beyond.

John has stated that Blue Moves is one of his favourites of the albums he has recorded. It was the last album Gus Dudgeon produced with John for almost a decade until 1985’s Ice on Fire. The cover art is from a painting by British artist Patrick Procktor, called “The Guardian Readers”. In the U.S., it was certified gold in October and platinum in December 1976 by the RIAA.

“Cage the Songbird” was a tribute to legendary French songstress Edith Piaf, and a year or so later was covered by Kiki Dee on an unreleased Rocket album, which finally was issued in 2008. (“Songbird” originated as part of the Rock of the Westies sessions, but was not completed during them, probably because the song’s acoustic, delicate sound did not fit with the more rock ‘n’ roll approach of the rest of the songs that made the Westies final track list.) The Beach Boys turned down “Chameleon” (which was written two years prior to the album’s release), but Bruce Johnston, a former Beach Boy, performed backing vocals on John’s version along with former Beach Boys touring member Toni Tennille. John also performed the song at Wembley Stadium in 1975, where he also performed the Captain Fantastic and the Brown Dirt Cowboy album in its entirety.

Basic tracks for Blue Moves were recorded at Eastern Sound in Toronto, Ontario. Additional overdubs were done at EMI Studios, Abbey Road in London, Brother Studio in Santa Monica, California and Sunset Sound in Los Angeles, California. The album was mixed at Marquee Studios in London.

Disc 1
1 Your Starter For

Disc 2
1 Sorry Seems To Be The Hardest Word

2 Out Of The Blue

3 Between Seventeen And Twenty

4 The Wide Eyed And Laughing

9 Theme From A Non-Existent Tv Series