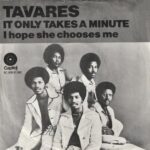 “It Only Takes A Minute” is a 1975 song by Tavares. The song was the group’s only top-10 pop hit in the United States, peaking at number 10, and their second number one song on the American soul charts. On the US Disco chart, “It Only Takes a Minute” spent five weeks at number two and was the first of four entries on the chart. The song was subsequently covered by Jonathan King performing as 100 Ton and a Feather in 1976 and by boy band Take That in 1992.

In The City is the third studio album by American soul/R&B group Tavares, released in 1975 on the Capitol label. The album peaked at No. 8 on the R&B albums chart. It also reached No. 26 on the Billboard 200. The album features the singles “It Only Takes a Minute”, which peaked at No. 1 […]