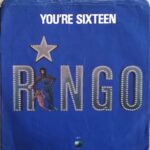 “You’re Sixteen” is a song written by the Sherman Brothers (Robert B. Sherman and Richard M. Sherman). It was first performed by American rockabilly singer Johnny Burnette, whose version peaked at number eight on the US Billboard Hot 100 in December 1960 and number 3 in the UK in 1961. The song was covered by Ringo Starr in 1973 and this version reached number one in the US.

Ringo Starr’s version was released as a single in the United States on December 3, 1973, and in the UK on February 8, 1974.In January 1974, the song, taken from the album Ringo, hit number one on the Billboard Hot 100. The latter performance reunited Ringo Starr with his former Beatles bandmate Paul McCartney. Although McCartney is credited on the liner notes of the album Ringo as having played the solo on a kazoo, reviewer Michael Verity has quoted the song’s producer Richard Perry as revealing that it wasn’t actually a kazoo: “In fact, the solo on ‘You’re Sixteen,’ which sounds like a kazoo or something, was Paul singing very spontaneously as we played that track back, so he’s singing the solo on that.” Starr’s version remains one of the few No. 1 singles to feature a ‘kazoo-sound’ solo. Harry Nilsson sang backing vocals on Starr’s version; Nicky Hopkins is heard playing the piano, including going up and down the scale in the instrumental fade of the song. In Ringo’s version, the melody and the chords were different in the bridge section, which led to a minor key, while the original version used only major keys. The ending featured Starr singing the chorus from Clarence “Frogman” Henry’s hit song “(I Don’t Know Why) But I Do” before breaking into a chorus of “What Shall We Do With the Drunken Sailor?” at the fade.

Cash Box called Ringo’s version “fantastic and perfect for the ’70’s,” going on to say that “not only is the vocal perfect, and steady, for this delightful easy going rocker, but the music is the perfect complement.”

Ringo is the third studio album by English musician Ringo Starr, released in 1973 on Apple Records. It peaked at No. 7 on the UK Albums Chart and No. 2 on the Billboard 200, and has been certified platinum by the RIAA. In Canada, it reached No. 1 on the RPM national albums chart. The […]