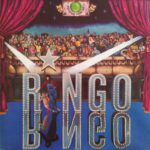 Ringo is the third studio album by English musician Ringo Starr, released in 1973 on Apple Records. It peaked at No. 7 on the UK Albums Chart and No. 2 on the Billboard 200, and has been certified platinum by the RIAA. In Canada, it reached No. 1 on the RPM national albums chart.

The album is noted for the participation of all four former Beatles, and for its numerous guest stars, something which would become a signature for Starr on many of his subsequent albums and tours.

Starr released the standards tribute Sentimental Journey and the country and western Beaucoups of Blues in 1970. He issued the singles “It Don’t Come Easy” and “Back Off Boogaloo” over 1971–72, both produced by and co-written with his former Beatles bandmate George Harrison. Both of these singles were big successes and would ordinarily have inspired albums to support them, but Starr declined to follow through, preferring to concentrate on acting during this period. In early 1973, Starr decided that the time was right to begin his first rock solo album. He had already used Richard Perry to arrange one of the tracks on Sentimental Journey, so he asked him to produce the sessions.

4 Sunshine Life For Me (Sail Away Raymond)

5 You’re Sixteen (You’re Beautiful And Your Mine)