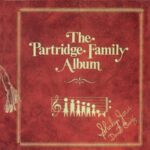 The Partridge Family Album is the first of eight studio albums by The Partridge Family. The LP was released in October 1970, a month after the debut of the ABC-TV musical sitcom The Partridge Family starring Shirley Jones and featuring David Cassidy, both of whom feature on the album, as do studio backing vocalists and session musicians. The success of the album – which in early January 1971 reached no. 4 on Billboard’s Top LP’s chart – was bolstered not only by the hit TV show but by the album’s one single release, the massive hit “I Think I Love You”, which for three weeks in November and December 1970 topped Billboard’s Hot 100 and which NARM declared best-selling single of 1970.

The album did not chart in the UK – the TV series did not debut in Great Britain until September 1971 – but reached no. 6 in Canada on the RPM 100 national album chart.

Members of overlapping studio groups the Ron Hicklin Singers and the Love Generation – brothers John and Tom Bahler, Ron Hicklin and Jackie Ward – feature prominently as backing vocalists throughout the album, as they do on all successive Partridge Family albums. Also, their blended harmonies dominate the album’s two tracks that do not include David Cassidy: “I’m on the Road” and “I Really Want to Know You”, both written by Barry Mann and Cynthia Weil. And on “To Be Lovers” they perform the verse, with Cassidy singing only the bridge. Originally the Bahler brothers, Hicklin and Ward were solely responsible for the Partridge Family sound. But with the revelation that David Cassidy could sing professionally, Wes Farrell promoted Cassidy to lead singer.

The album’s cover was designed to look like an old-fashioned photo album. The album’s back cover features a picture of the whole TV family alongside solo portraits of David Cassidy and Shirley Jones. Certain copies included a label promoting the LP’s inclusion of “I Think I Love You”; this was embedded in the front cover artwork (and not on the protective plastic). The original release of the album included a framed color photograph of the group.

Designed At – The Music Agency
Recorded At – Western Recorders