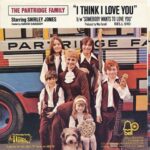 “I Think I Love You” is a song by Tony Romeo, written as the debut single for fictional musical TV family The Partridge Family, released in August 1970, a month prior to the debut of the ABC-TV musical sitcom The Partridge Family starring Shirley Jones and featuring David Cassidy, both of whom appear on the record, with Cassidy as lead vocalist. The single topped Billboard’s Hot 100 for three weeks in November and December 1970 and later was certified by NARM as the best-selling single of 1970.

The single, which was produced by Wes Farrell and issued on Bell Records, featured twice on the TV show during the record’s seven-week climb to number one on Billboard’s Hot 100. Cassidy lip-synched his performance, as he did for all songs throughout the four-year series. As with all of the Partridge Family’s studio output, the single features musicians associated with iconic Los Angeles-based session players “the Wrecking Crew”: Dennis Budimir, Louie Shelton, Tommy Tedesco, Joe Osborn, Max Bennett, Larry Knechtel, Mike Melvoin, and Hal Blaine. And members of overlapping studio groups the Ron Hicklin Singers and the Love Generation – brothers John and Tom Bahler (also spelled Bähler), Ron Hicklin, and Jackie Ward – feature as backing vocalists, as they do on all successive Partridge Family recordings.

Cash Box said of the song that “attractive sound side and material curries favorable attention from all types of pop programmers.” Four million copies of the single release were sold.