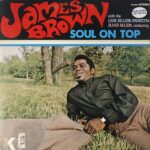 Soul On Top is the 28th studio album by American musician James Brown. The album was released in April 1970, by King. Brown and saxophonist Maceo Parker worked with arranger/conductor Oliver Nelson to record a big band, funk and jazz vocal album. It was recorded with Louie Bellson and his 18-piece jazz orchestra at United Western Recorders in Hollywood, California in November 1969, and features jazz standards, show tunes, and middle of the road hits, as well as a new arrangement of Brown’s funk hit “Papa’s Got a Brand New Bag”.

The album was reissued in 2004 with one previously unreleased bonus track, a big band version of Brown’s 1967 hit “There Was a Time”, and new liner notes by jazz critic Will Friedwald.