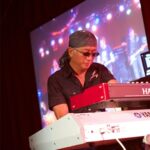 Ryo Okumoto (born May 24, 1959) is a Japanese rock keyboardist, best known for his work with progressive rock group Spock’s Beard. He joined the band in 1996 and has been a member ever since. When singer and keyboardist Neal Morse was in the band, Ryo played Hammond organ and Mellotron on the albums. Since Morse’s departure, Okumoto has played all of the band’s keyboard parts. He resides in Los Angeles.

Aside from his work with Spock’s Beard, Okumoto has performed and recorded with numerous other artists and groups, including GPS, K², Phill Collins, Eric Clapton, and Asia featuring John Payne. For three weeks in 1998, Okumoto was a member of Eric Burdon & the New Animals, before being replaced by Martin Gerschwitz.

Okumoto was a member of Eric Andre’s house band on season 5 of the Eric Andre Show.