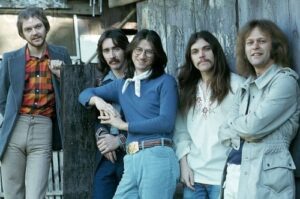 Poco was an American country rock band originally formed in 1968 after the demise of Buffalo Springfield. Guitarists Richie Furay and Jim Messina, former members of Buffalo Springfield, were joined by multi-instrumentalist Rusty Young, bassist Randy Meisner, and drummer George Grantham. Meisner quit the band whilst they were recording their first album, Pickin’ Up the Pieces, though his bass and backing vocal parts were kept in the final mix. He was replaced by Timothy B. Schmit in 1969, and Messina left in 1970 to be replaced by Paul Cotton. The line-up would change numerous times over the next several decades, with Rusty Young being the only constant member. A reunion of the founding members occurred in the late 1980s-early 1990s, and the band has continued in some form through 2021, though they retired from active touring in 2013, with Young citing health concerns as the primary cause of his retirement. Young died from a heart attack in April 2021.

To date, the band has released 19 studio albums, the most successful of which was 1978’s Legend, which featured the Billboard Hot 100 #17 and Adult Contemporary #1 hit “Crazy Love”. The band’s most recent album was 2013’s All Fired Up.

Poco are considered one of the founders of the Southern California country rock sound, and three of the members of the band have been inducted in the Rock and Roll Hall of Fame as members of other bands (Furay with Buffalo Springfield, Meisner and Schmit with The Eagles). However, the band has yet to receive a nomination since entering eligibility in 1995.