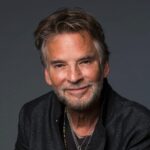 Kenneth Clark Loggins (born January 7, 1948) is an American musician, singer and songwriter. His early songs were recorded with the Nitty Gritty Dirt Band in 1970, which led to seven albums recorded as Loggins and Messina from 1972 to 1977. His early soundtrack contributions date back to A Star Is Born in 1976,  and he is known as the King of the Movie Soundtrack. As a solo artist, Loggins experienced a string of soundtrack successes, including an Academy Award nomination for “Footloose” in 1985. Finally Home was released in 2013, shortly after Loggins formed the group Blue Sky Riders with Gary Burr and Georgia Middleman.  He won a Daytime Emmy Award, two Grammy Awards, and was nominated for an Academy Award, a Tony Award, and a Golden Globe Award.

In 1977, Loggins produced his first solo album, Celebrate Me Home, which included the successful song “I Believe in Love”, originally sung by Barbra Streisand in A Star Is Born. Nightwatch, a popular album released in 1978, included the hit song “Whenever I Call You Friend”, a duet with Stevie Nicks of Fleetwood Mac, co-written with Melissa Manchester. Loggins followed that in 1979 with Keep the Fire and in 1982 with High Adventure. The latter contained his rock duet with Journey frontman Steve Perry, “Don’t Fight It”, which rose to No. 17 on the US Billboard Top 100. Loggins abandoned the harmonica in his solo career but continued to play guitar, just as he had done with Loggins & Messina.

During the next decade, Loggins recorded so many successful songs for film soundtracks that he became known as the King of the Movie Soundtrack. It began with “I’m Alright” from Caddyshack. Hits followed with “Footloose” and “I’m Free (Heaven Helps the Man)” from Footloose; “Meet Me Half Way” from Over the Top; and “Danger Zone” and “Playing with the Boys” from Top Gun. Loggins also performed “Nobody’s Fool” for the film Caddyshack II. He performed as a member of USA for Africa on the famine-relief fundraising single “We Are the World”, which led to an appearance performing “Footloose” at the Philadelphia leg of the July 13, 1985, Live Aid famine-relief dual-venue charity concert and global television broadcast.

During the 1990s, Loggins continued his album career, including the popular 1994 children’s album Return to Pooh Corner, which included the title single, a reworking of “House at Pooh Corner”, written for his newborn son Luke.

In 1991, Loggins recorded and produced Leap of Faith, which included the single “Conviction of the Heart”. Vice President Al Gore called this song “the unofficial anthem of the environmental movement”. On Earth Day 1995, Loggins performed at The National Mall in Washington, D.C. before a live audience of 500,000.

In 1997, Loggins released the album The Unimaginable Life, based on a book he co-wrote with his then wife Julia. Tracks include “Now That I Know Love”, “The Art of Letting Go”, and “One Chance at a Time”. The album was produced by Loggins and Randy Jackson with background vocals by Skyler Jett, Lamont VanHook, and Howard Smith.

In 1998, Loggins recorded a version of the Sesame Street song “One Small Voice” for the ABC television special Elmopalooza, which was included as a track on the Grammy Award-winning soundtrack album.