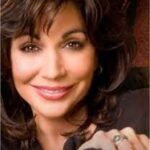 After graduating from high school, Troccoli studied jazz and opera at the Berklee College of Music in Boston for a year, then returned to Long Island to major in voice at Suffolk County Community College (SCCC) also singing with a SCCC-based jazz band and later singing in Long Island clubs. In the summer of 1978, while working a “day job” to help cover her college expenses, Troccoli formed a friendship with a born again Christian co-worker; this led to Troccoli herself becoming a devout Christian. Troccoli’s alto voice gained prominence when she opened for Ed Nalle’s group, GLAD, when the group performed at the Long Island church Troccoli attended in 1980. Approximately six months afterwards, Nalle invited Troccoli to record a demo tape, with his band’s backing, and Kathy accepted. After she and GLAD had recorded it, the tape was submitted to Michael Blanton and Dan Harrell (Amy Grant’s brother-in-law); these two, as a result of hearing it, formed the Reunion Records label, in Nashville, specifically to record Troccoli, and Kathy herself, in turn, moved to Nashville to reside with Harrell and his family.

Troccoli’s debut album, the 1982 release Stubborn Love, was reportedly the best-selling debut album by a contemporary Christian music female artist. A second album, Heart and Soul, was released in 1984; it led to her receiving her first Grammy nomination a year later, in 1986, in which year Images followed it. Troccoli then withdrew from her musical career returning to Long Island for a six-year sojourn, giving singing lessons and sang at weddings.In 1989, Troccoli was prominently featured on the selection “I’ll Be Your Shelter”, a Diane Warren-penned song which Taylor Dayne recorded for her album Can’t Fight Fate. “I’ll Be Your Shelter” became a Top Ten single in 1990.

After her mother’s death, Troccoli returned to the Reunion Records label in 1991 for her secular album debut, Pure Attraction, whose lead single, “Everything Changes”, Warren had written and composed for Taylor Dayne. Dayne had turned the selection down, however, and Joe Galante, then president of RCA Records, through which Reunion releases were distributed, offered it to Troccoli, who recalled: “He played it, and I knew I could own it. This was something I wanted to say.” Peaking at No. 14 on the Hot 100 in Billboard, “Everything Changes” also charted on the magazine’s Adult Contemporary chart reaching No. 6. “Help Myself To You” became Troccoli’s first No. 1 hit in her ten-year career, and began a string of GMA Music Awards nominations, including numerous attempts at Female Vocalist.

Numerous hit songs came afterwards, including 1994’s “My Life is in Your Hands”, jointly written and composed with Bill Montvilo, which defined her career and inspired the devotional book of the same title, written in 1997, and 1995’s “Go Light Your World”, which began the rise of writer Chris Rice and was used for charity efforts that year.

In 1996, Troccoli was featured on the Beach Boys’s now out-of-print album Stars and Stripes Vol. 1, singing lead vocals on a cover of their 1969 song “I Can Hear Music”, itself a cover of a Phil Spector song. The Beach Boys sing on the track as well, providing harmonies and backing vocals.