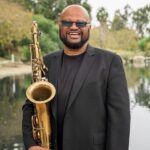 Musician and screenwriter Herbert Baker taught music and mentored Lawrence, who recalled Baker as “one of the greatest pianists who ever lived.”