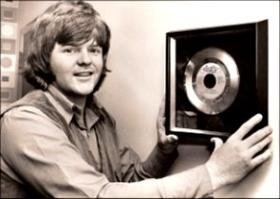 Roberts was born on September 19, 1945 in Newport News, Virginia. As the lead singer of Arkade, he had two Billboard Hot 100 hits in 1970-71, including the easy listening crossover, “The Morning of Our Lives”, which became the Bridal Fair theme, later a Top 15 Adult Contemporary hit, and “Sing Out the Love (In My Heart)”, which reached No. 99 on the Hot 100.

Roberts performed the theme song to the second season of the animated series, Scooby-Doo, Where Are You! as well as the season 2 “chase songs”, many of which he also composed.

“Rocky” brought his greatest success, reaching No. 9 on the Hot 100 in October 1975. The track also reached No. 22 in the UK in November 1975, which to date is Roberts’ only chart appearance in the UK.

Roberts and Hart later wrote the song “Over You” for the 1983 film, Tender Mercies. “Over You” was nominated for the 1984 Academy Award for Best Original Song, as well as the Golden Globe nomination for Best Song in a Motion Picture.

Roberts has been nominated for four Grammy Awards, two of which he won (“I.O.U” by Lee Greenwood and “Chance of a Lifetime” by Take 6).

He also won a German award (for “Mission of Love”), four Canadian awards (for “He Would Be Sixteen” by Michelle Wright, as well as the 1993 CCMA Single of the Year), a CMA Award, an ACM Award, a Music City News Award, two NSAI Awards, and numerous ASCAP and SESAC Awards for airplay. Roberts has also been nominated for an additional CMA Award and ACM Award.

1973 Austin Roberts – The Last Thing On My Mind