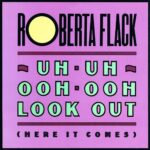 Uh-Uh Ooh-Ooh Look Out (Here It Comes)” is the Ashford & Simpson-penned, 1989 single by Roberta Flack. The single was the follow-up to her number one R&B hit, “Oasis”. “Uh-Uh Ooh-Ooh Look Out (Here It Comes)” stalled at number thirty-seven on the U.S. R&B singles chart, failing to chart on the Billboard Hot 100. In addition, a remix of the single made it to number one on the dance club play chart for one week. Ashford & Simpson recorded the song themselves for the soundtrack of the 1998 film, Down In The Delta.