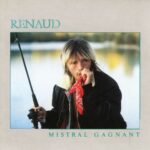 Mistral gagnant is a studio album from French artist Renaud on the Virgin France label, now part of EMI, released in 1985.

The first song, “Miss Maggie”, made Renaud a controversial character in the United Kingdom because the song praises women for their non-violence and honesty with the exception of PM Margaret Thatcher (a version of the song with the lyrics adapted in English was also recorded). The last verses read (translated from French): “In the final hour, […] if I can stay on earth, I would like to become a dog and have Margaret Thatcher as a lamp post to urinate against, daily.” It was composed with Jean-Pierre Bucolo, who also helped with “La pêche à la ligne” and “Si t’es mon pote”, while Franck Langolff co-wrote the music for “Morts les enfants” and “Fatigué”.

In the title song “Mistral gagnant”, Renaud sings to his young daughter about his childhood and realizes that time flies as will fly away the laughs of his daughter as a child. This broad theme plus the very simple music make this song one of the classics among Renaud’s “tender” songs. A mistral gagnant was a kind of candy and lottery. Some of them were “winning” (gagnant) and you could get another one for free. These candies were not on sale anymore when he wrote the song.