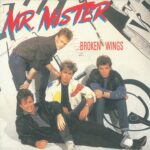 “Broken Wings” is a 1985 song recorded by American pop rock band Mr. Mister. It was released in June 1985 as the lead single from their second album Welcome to the Real World. The song peaked at number one on the Billboard Hot 100 in December 1985, where it remained for two weeks. It was released as the band was just about to embark on a US tour opening for Tina Turner. “Broken Wings” became the first of two consecutive number ones of the band on the American charts, the other chart-topper being “Kyrie”. Outside of the United States, “Broken Wings” topped the charts in Canada, peaked within the top ten of the charts in Australia, Belgium (Flanders), the Netherlands, Norway, the Republic of Ireland, Switzerland, the United Kingdom and West Germany, and the top twenty of the charts in Austria, New Zealand, Spain and Sweden.

Welcome To The Real World is the second studio album by American pop rock band Mr. Mister, released on November 27, 1985, by RCA Records. Two singles from the album, “Broken Wings” and “Kyrie”, both topped the US Billboard Hot 100 chart, while “Is It Love” peaked at number eight. Welcome to the Real World […]