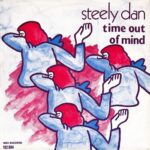 Time Out Of My Mind is the second single from the Gaucho album by Steely Dan. It peaked at #22 in the US Charts.

Gaucho is the seventh studio album by the American jazz rock band Steely Dan, released in 1980. The sessions for Gaucho represent the band’s typical penchant for studio perfectionism and obsessive recording technique. To record the album, the band used at least 42 different musicians, spent over a year in the studio, and far exceeded […]