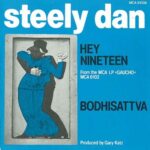 “Hey Nineteen” is a song by the band Steely Dan from their album Gaucho (1980).

“Hey Nineteen” peaked at number 10 on the Billboard Hot 100 chart in early 1981, number 11 on the Adult Contemporary chart, and number 68 on the R&B Singles chart. With a chart run of 19 weeks, “Hey Nineteen” is tied with “Peg” and “Rikki Don’t Lose That Number” for being their longest-running chart hit.

Gaucho is the seventh studio album by the American jazz rock band Steely Dan, released in 1980. The sessions for Gaucho represent the band’s typical penchant for studio perfectionism and obsessive recording technique. To record the album, the band used at least 42 different musicians, spent over a year in the studio, and far exceeded […]