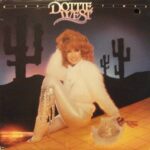 High Times is an album, released in 1981 by country singer Dottie West.

This album was built around the title track, “It’s High Time”. The single was released in early 1982 and reached No. 16 on the Billboard Country music charts, West’s last Top 20 hit of her career. Another single from the album was also released, entitled “You’re Not Easy to Forget”, which reached No. 26 on the Billboard Country charts and No. 19 on the Cashbox Country charts. Other songs on the album focus on the more popular, Country-Pop style. The album only hit No. 43 on the “Top Country Albums” chart.