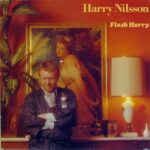 Flash Harry is the fifteenth studio album by Harry Nilsson. Originally the album was not given a worldwide release and was only issued in the U.K., Japan, Germany, France, Spain, The Netherlands, Australia, and Scandinavia. It was not issued in the United States until August 2013. Upon release it received little promotion from Mercury, with no proper single from the album.

The album features Nilsson’s own recording of “Old Dirt Road”, co-written and performed with John Lennon on Lennon’s album Walls and Bridges (1974), Lennon’s last album of original songs before his six-year hiatus.

Shortly after the release of this album, Nilsson retired from recording. Though he would subsequently reverse his decision and record various songs for film soundtracks in the 1980s and 1990s, he never issued another full album. (Hours before his 1994 death, Nilsson finished recording the final vocal tracks for a planned ‘comeback’ album, which was released on November 22, 2019 as Losst and Founnd.)