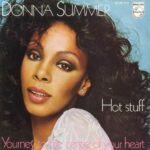 “Hot Stuff” is a song by American singer Donna Summer from her seventh studio album Bad Girls (1979), produced by English producer Pete Bellotte and Italian producer Giorgio Moroder and released as the lead single from Bad Girls in 1979 through Casablanca Records. Up to that point, Summer had mainly been associated with disco songs but this song also showed a significant rock direction, including a guitar solo by ex-Doobie Brother and Steely Dan guitarist Jeff “Skunk” Baxter. It is the second of four songs by Summer to reach number one on the Billboard Hot 100.

In 2018, a remix by Ralphi Rosario and Erick Ibiza entitled “Hot Stuff 2018” went to number one on the US Dance Club Songs chart.