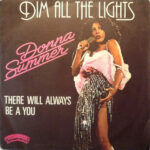 “Dim All The Lights” is a song by American recording artist Donna Summer released as the third single from her 1979 album Bad Girls. It debuted at number 70 on August 25, 1979, and peaked that year at number two on November 10 and November 17 on the Billboard Hot 100. It was blocked from becoming the third number one hit from the album, first by “Heartache Tonight” by the Eagles for one week, then by “Still” by Commodores the next week. Produced by her longtime collaborator Giorgio Moroder with Pete Bellotte, the track combines Summer’s trademark disco beats with a more soulful pop sound. It was the third Hot 100 top-two single from the album and her sixth consecutive Hot 100 top-five single.