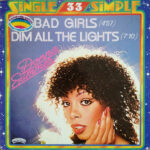 “Bad Girls” is a song by American singer Donna Summer from her 1979 seventh studio album of the same name. It was released as the album’s second single on June 23, 1979, by Casablanca Records. The song was produced by Summer’s regular collaborators Giorgio Moroder and Pete Bellotte, and co-written by Summer and the Brooklyn Dreams.

“Bad Girls” became a worldwide success, peaking within the top-ten in seven countries, including Spain and New Zealand. In the United States, it spent five weeks at number one on the Billboard Hot 100, from the weeks of July 14 to August 11, 1979; and sold over two million copies, simultaneously becoming, alongside “Hot Stuff”, her most successful single. The single, which was the second-biggest song of 1979, also helped the Bad Girls album to reach multi-Platinum status in the United States. Summer placed three songs in the top 12 of the Billboard 1979 Year-End chart.